How Australia has failed the Covid Test

Yesterday was Anzac Day. Anzac Day is a national day of remembrance in Australia and New Zealand that commemorates all Australians and New Zealanders “who served and died in all wars, conflicts, and peacekeeping operations”. It is a day where we say, ‘Lest we forget’. I thought this referred to all Australians who have suffered or are suffering, but it turns out that it doesn’t apply to Australians stranded overseas. The term ‘mateship’ is often associated with Australia’s diggers in World War I and is about not leaving your comrades behind. Again, this doesn’t appear to apply to the 5,000 vulnerable, stranded Australian citizens, or the other 30,000 who are stranded overseas but not classed as vulnerable (yet).

Of course, I am not comparing those who risk and lost their lives during the war with those Australians stranded overseas. But surely their lives are equally valuable. These are our fellow citizen’s lives we are talking about. And I believe it is un-Australian to not help a fellow citizen in need.

My words might seem controversial, but I’m in good company. The UN Human Rights Committee has ruled that the Australian government must “facilitate and ensure” the prompt return of two Australians who are arguing that caps on travel are a breach of international law. The lawyer of these two Australians is none other than prominent barrister Geoffrey Robertson, QC. Like most Australians stranded overseas, I am not against the concept of quarantine for those returning here. Of course, we all want to keep Australia safe, just not at the expense of other’s safety.

Why are Australians still stranded overseas?

Below are just a few examples of the many reasons…

Despite all of the above reasons, every time there are a few cases in NSW hotel quarantine, I am saddened by those who say, “close the borders”.

The other comment that frustrates me is “they were told to come home over a year ago” or similar. This is actually not true. The federal government actually advised that you should stay where you were if you had a stable income and a safe place to live. 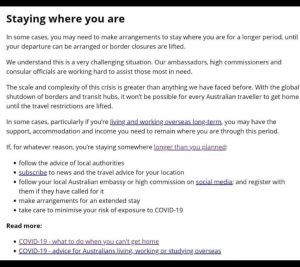 In all honesty, though, these reasons should not matter. It should be every Australian’s right as a citizen to go to and from Australia, as necessary. Obviously with some form of quarantine at both ends.

However, is the current form of Hotel Quarantine the best way to handle it?

There is a lot of debate about this. Originally, over a year ago, it was the obvious choice. But we have learnt a lot since then. At least some of us have. Even WHO (World Health Organisation) stated that “Ventilation is an important factor in preventing the virus that causes COVID-19 from spreading. Recirculated air from split air conditioning units, fan coils or any system that runs with a recirculation mode should be avoided where possible, unless in a single occupancy room with no one else present. If recirculation is unavoidable, increase outdoor air exchange by opening windows, if possible and safe to do so, and minimize air blowing from one person directly at another.”

According to Epidemiologist and Head of the Melbourne School of Population and Global Health, Professor Nancy Baxter “that’s why most of the superspreading events that have occurred have occurred in indoor settings with poor ventilation.” And it’s no secret that many of the hotels used for quarantine have poor ventilation. They weren’t designed for this purpose.

Dr Schofield, University of Melbourne environmental scientist, said that outside air is “considered the best sort of ventilation we have”. Luckily, everyone who gets a repatriation flight to Darwin and quarantines at Howard Springs has their own veranda with fresh air. In NSW, only the health hotels and family apartments have a balcony with access to fresh air. Most people quarantining in Australia are not as lucky.

The other way Australia has failed us is our vaccine rollout. As of 23 April 2021, 1.9 million Australians have so far received at least one dose. We have a population of approximately 25.8 million people. According to the ABC, at the current pace of roughly 354,000 doses a week, we can expect to reach the 40 million doses needed to fully vaccinate Australia’s adult population in mid-May 2023!  For someone like myself, who has parents and family overseas, this embarrassingly, slow rollout is inconceivable. But for people like Andre Rivenell, it could be a matter of life and death. You can read the full tragic story here, but essentially, he travelled to the US to visit his sick mother-in-law in late December 2019, had a couple of cancelled flights, then got really sick in December 2020, but he can’t afford any medical treatment as he doesn’t have any health insurance.

Meanwhile, in the UK, all adults are expected to have been offered their first dose of vaccine by July this year. One of the reasons for the delay here is that they are now recommending under 50s don’t have the AstraZeneca jab, which is putting off many of those over 50 from having it.

So what am I proposing?

Did you also know that New Zealand has also managed to successfully handle this pandemic and their returning citizens, without the uncertainty our citizens have? New Zealanders must book their place in hotel quarantine before they can book a flight. Their quarantine space is held for 48 hours whilst they book their flights. And importantly, once both are booked their flight home is guaranteed. No wondering if their flight will be cancelled time and time again. Our fellow Anzac country has proved that it is possible to help its citizens already in the country, as well as those trying to get home.

Did you know that one week after the Victorian government announced they were halving the caps for returning citizens due to a lack of space in suitable facilities, they announced they had found over 1,200 spaces for tennis players and support staff? And just 4 days after The Open started Victoria closed their airport to Australian citizens again for 2 months.

Did you also know a resort in South Australia has been converted to house 1,200 fruit pickers from the Pacific Islands? I am fine with this, but why have state and/or federal governments not built or converted resorts in every state and territory for Australian citizens wishing to come home? We need these buildings. Buildings with ventilation, and the option for fresh air, like at Howard Springs and the health hotels in Sydney.

A year ago, my proposal would have been deemed ridiculous, but I believe that by now with 13 months’ experience and knowledge, major changes should have been made. Basically, I believe it comes down to this:

In summary…When I mentioned to someone the headline of this article, they asked how Australia had failed if 80,000 people were able to go to the MCG yesterday. My response was and still is, that they have “failed those overseas & failed those with family overseas (especially those with family who are ill or dying)”. When I mentioned to someone else that we need to speed up the vaccination process as many Australians have family overseas, he asked why they can’t just use Facetime! Clearly, this person has no family overseas or even a heart.

Please let me know what you think in the comments below.

If you agree with this article and believe the numbers should be increased, please sign these petitions: